The Boys Are Back, and Winter's Coming

The author, Carole, gives Topper, an 8-year-old Scottish Highlander steer, a chin scratch while Galen, a 5-year-old steer, looks on. You can visit these two and the other boys at Miles Smith Farm in Loudon during store hours.

My older Scottish Highlander steers (I like to call them The Boys) are finally back at the farm after spending most of the summer at Ty Miller's pasture in Canterbury. Because of the drought, they had eaten all the grass there, so every few days we'd load a round, 600-pound bale of hay onto the back of the pickup, drive it five miles to the pasture, unwrap it, and push it off the truck. Sometimes we'd serve them a barrel of berries from Hermit Woods Winery or a barrel of cabbage or cauliflower from grocery-store scraps. All seven steers, each weighing over 1,200 pounds, would watch for the truck and come running when we drove into the pasture.

The Boys stayed at Ty's longer than I planned because I was short of help.

Duncan To The Rescue

During this second wave of the pandemic, many of my staff were sidelined, leaving me to do most of the farm work. So, I didn't have time to get them. Thankfully, most days in October and early November were warmer than usual, so their water didn't freeze. Then, in November, farmworker (and hero) Duncan came to the rescue. He heard of our plight and flew back from Alaska, where he had been at sea for over two months on a fishing boat. Now he is helping winterize the farm and feed the animals while our staff recovers. It was Duncan who brought The Boys back from Ty's.

One winterizing job is to set up the water troughs so that the insulating balls are all in place. We use bolts to push the insulated balls to the side during the summer, so drinking is easy for the cattle. Now is the time to release the balls to protect the water from freezing. The cows push the balls aside to drink, and when done, the ball floats back in place.

Horns Are For Belly Scratching

We also have to winterize the cattle by treating them for lice. All that long hair we shave off them in the spring has grown back, providing a delightful habitat for lice. Lice won't kill or injure the cattle, but they sure make them miserable; imagine your dog or cat scratching at fleas. Lice are just as annoying. To scratch, my cattle use their horns like a human might use a back-scratcher. Long horns can reach those hard-to-get itches, but sometimes help is needed. One time, Stash, one of my trained oxen, was lying down, his massive horns resting on the ground. Topper, another ox, stood in just the right spot to scratch his belly with the tip of one of Stash's horns.

Despite their scratching capabilities, human intervention is called for. They need their shaggy coats for warmth, so another shave is out of the question. So we pour an insecticide on each cow's back; much like applying flea treatment to a dog or cat.

Joe and Donnie Working Together

Duncan treated the seven steers with Ivermectin, and in 14 days, we'll repeat the treatment to rid them of any surviving lice. Now that my team of oxen, Topper and Stash, are home and on their way to being bug-free, I'll start working them again in a yoke. I'll also take some time to teach my yearling Highlander calves, Joe and Donnie, to also work in a yoke. Maybe those two will cooperate, unlike their politician namesakes! 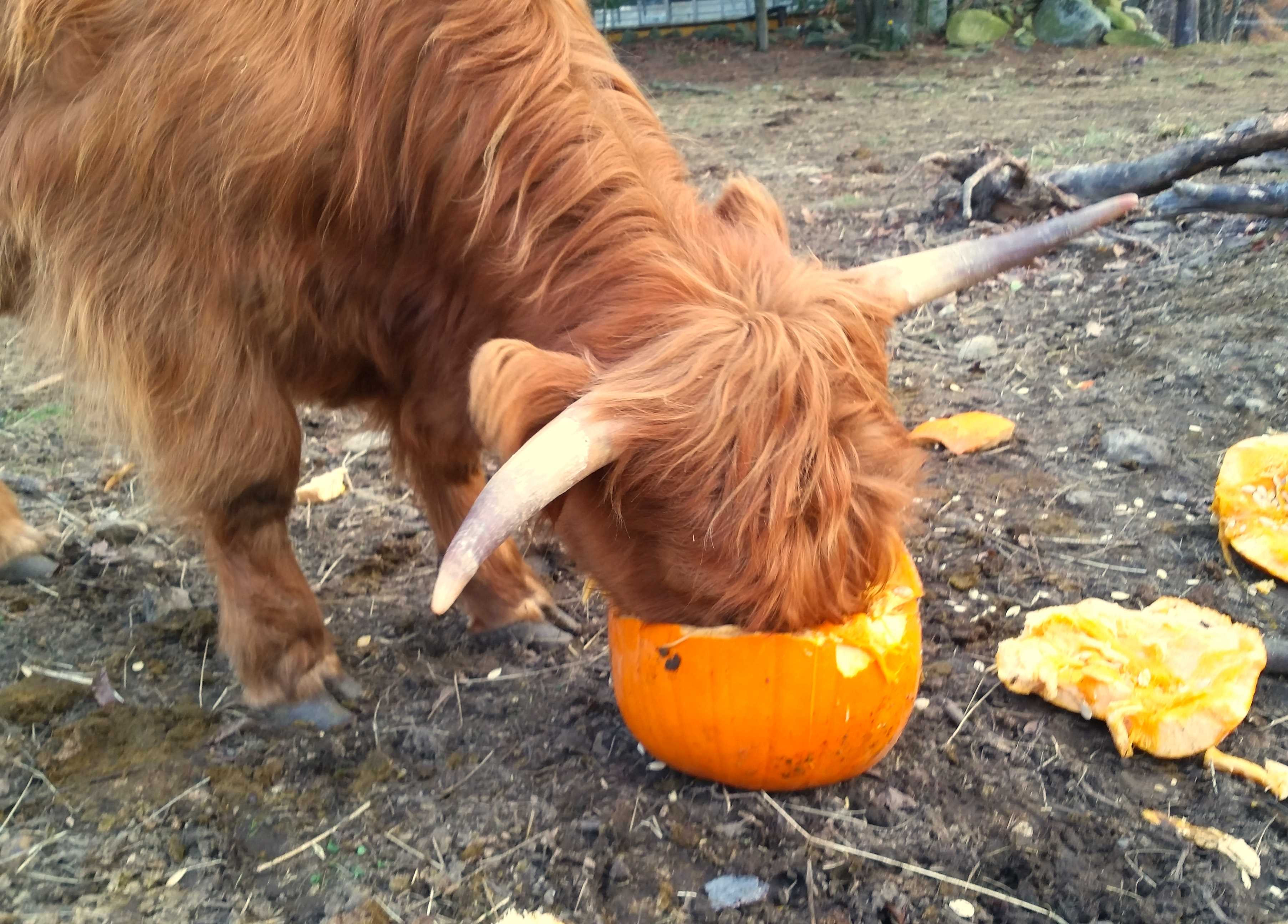 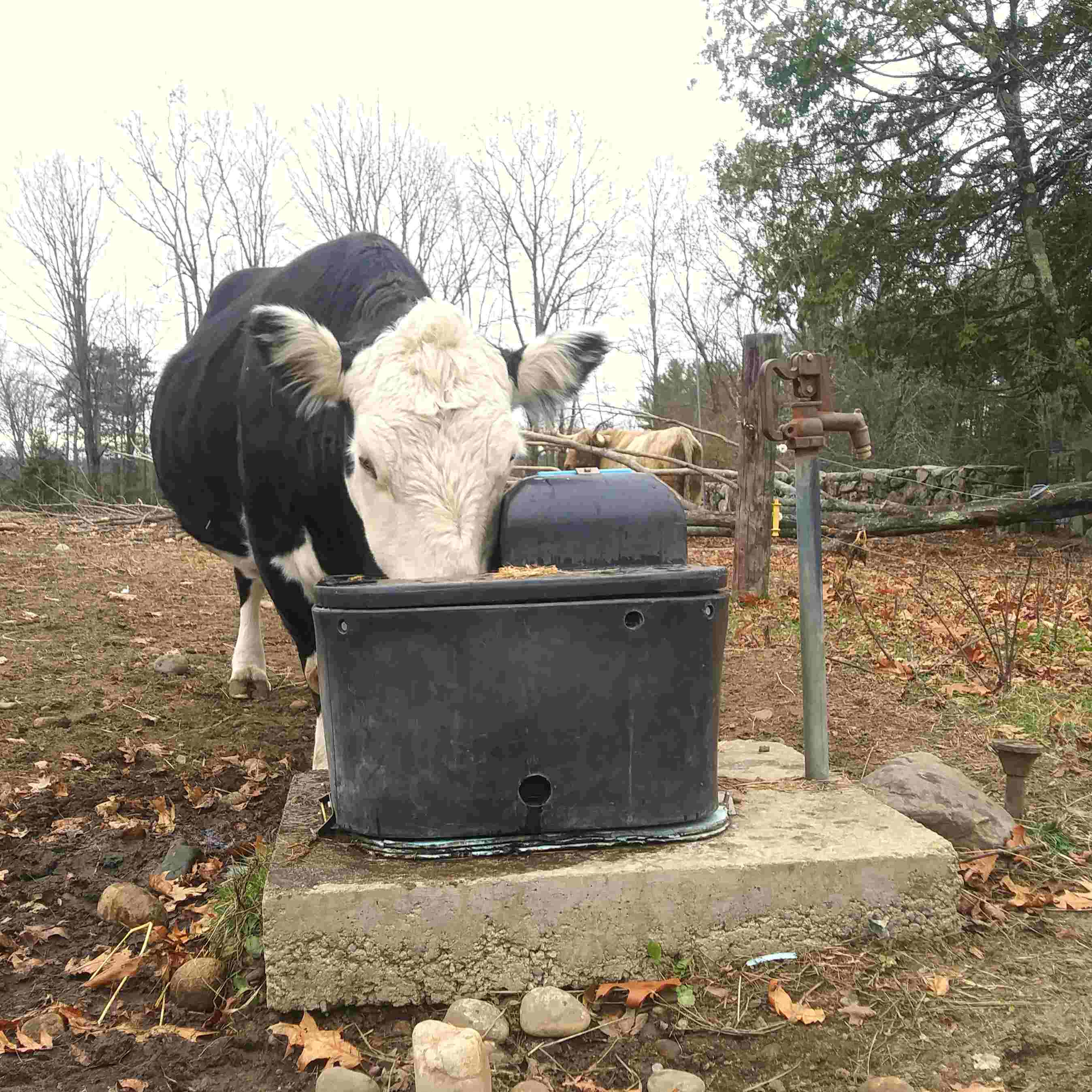