One day last week, the temperature was close to 60. It felt like spring. The grass seemed greener, and the smell of damp-not-frozen soil was in the air. I took off my jacket when feeding the cattle. It was warm. Alas two days later, with the icy wind piercing my down jacket, it seemed like 20 below zero. Winter was back. Encouragement is needed, and when the cold seems never-ending, here comes Groundhog Day!

Feb. 2 marks the midway point between the winter solstice and the vernal equinox. It's when groundhogs supposedly emerge from their burrows, and if the weather is sunny and they are frightened by their shadows, they dive back into their holes, and winter persists for six more weeks. It's a Pennsylvania Dutch superstition. Over the years, Punxsutawney Phil has come to be the celebrity groundhog, and all eyes are on him.

For farmers with critters to feed, Feb. 2 has serious significance in the adage: "Half your hay by Ground Hog Day," meaning if you've used more than half your hay, you're probably going to run out.

Groundhog Day is not only the half-way point for hay-feeding but this year, it’s also the precursor for our Feb. 11 first-in-the-nation Presidential Primary. This is the season when the state is flooded with politicians. They show up at farmers' markets, on street corners, in grocery stores, and during the 2016 race

Libertarian candidate, Gary Johnson showed up at our farm; twice. Of course, for each politician, there seem to be hundreds of out-of-state supporters, well-known TV personalities, and camera-people trailing the candidates and seeking local color.

If New Hampshire can upend political wisdom by elevating under-dogs, why can’t we also topple Punxsutawney Phil’s monopoly on predicting the end of winter? Scientific observation does not support Phil's findings, which means any animal is qualified to forecast the weather and that the exact day doesn't matter. There's an opportunity knocking on the barn door.

This year our mini-pig, Tazzy D. Moo, has agreed to challenge Phil’s role as end-of-winter-predictor by dressing up like a groundhog. This is an opportunity Tazzy has been waiting for her whole life. To honor tradition, she will wear a fashionable groundhog costume, but unlike Phil, who doesn’t speak, Tazzy will give a speech. This is New Hampshire, and even if she is a pig, her voice matters. It’s hard to know who wants to hear what she has to say, but isn't that true of politicians too?

Stop by the farm on Saturday, Feb. 1, between 11 a.m. and 3 p.m. to see Punxy Tazzy at work. We'll also have cows to feed; Curious Bleu, the Scottish Highlander steer, to sit on; calves to brush; and marshmallows to roast. Who knows, maybe the news media will be there looking for local color and someone to quote. If so, Tazzy will be ready.

There's a calf in my kitchen!

That Wasn't Me at the Fast-Food Joint 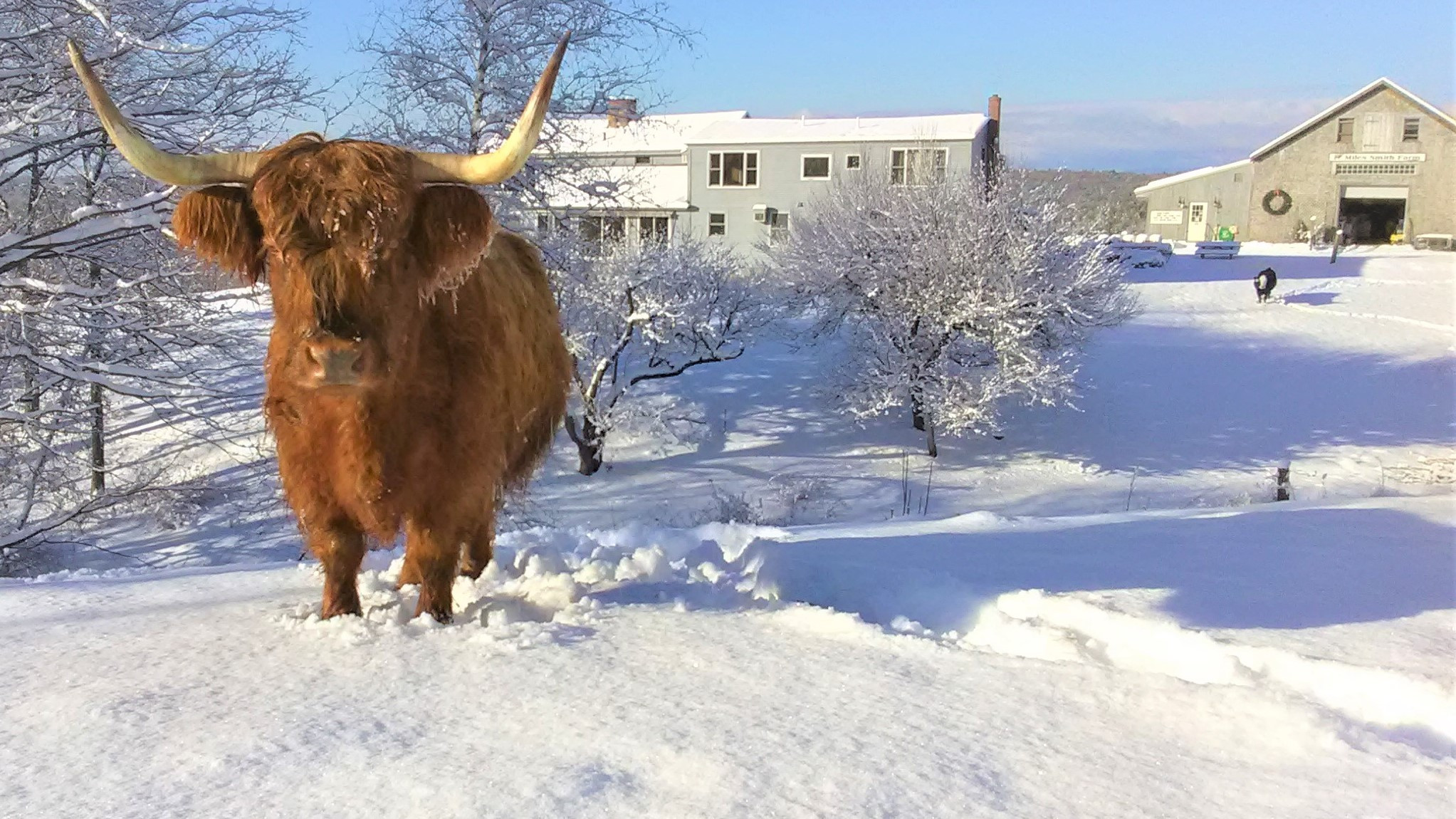 Dealing with a rebellious bull 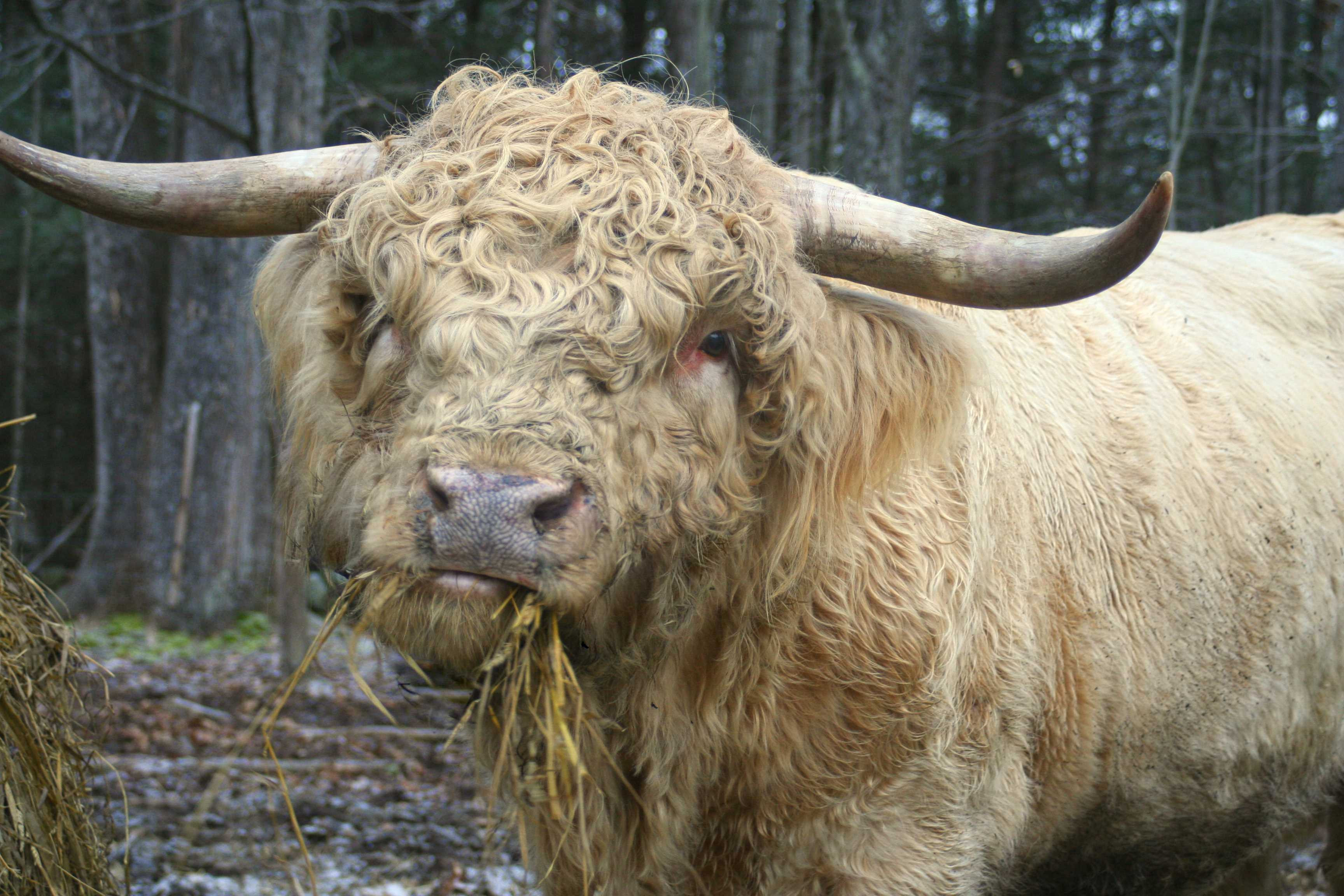