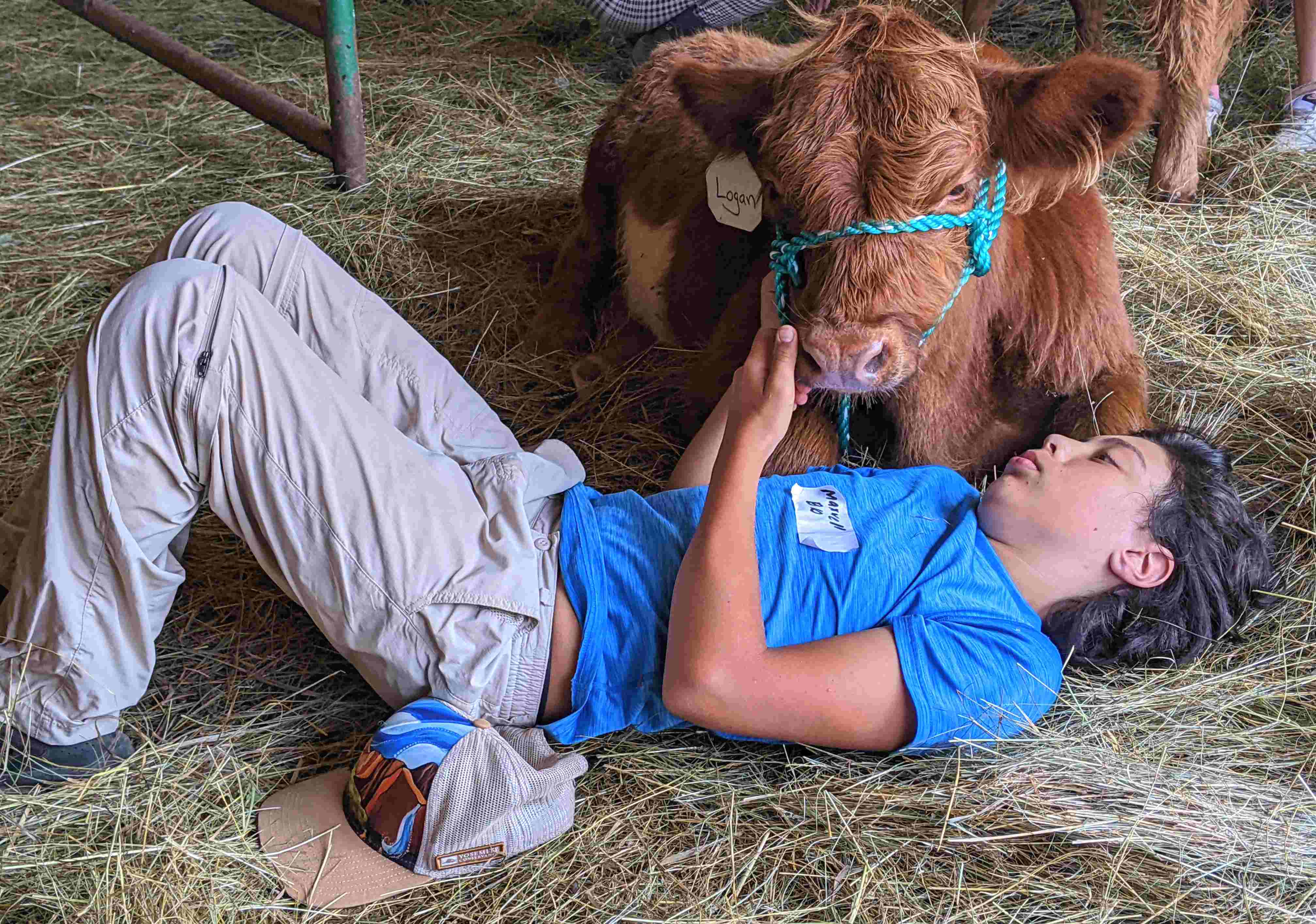 Maxwell takes a break with his calf, Logan, at the Learning Networks Foundation Summer Camp, where eight teams of two campers paired up with a calf for the week. The week ended with a “Calf Show,” where the campers got to show off what they learned during camp.

It was the last day of the second week-long session of Farm Camp, and the children and calves were relaxing together in the cool of the farm's Holding Pen. Logan, a Scottish Highlander bull calf, laid his head on Maxwell's lap. In the corner of the pen, Sydney and Kiera snuggled with Sophie, a 2-month-old Highlander heifer. It was a peaceful scene to be savored.

I like to start halter training the calves when they are only two months old. Early training means the calf needs to visit Mom twice a day to nurse, but the rest of the time, he learns how to be led and be brushed. Most untamed calves detest human scent, so one of my first jobs is to get them to sniff my hand and then my hair. As humans go, I don't smell horrible, and they get used to it.

Untrained calves also don't like being touched under the chin and around the throat. Have you seen the TV shows where lions take down prey by grabbing the animal's jugular? Calves instinctively know their throat is to be protected and will leap away when I reach for the neck. Once the calf accepts my scent and will let me scratch her chin, she's ready for the next step, learning how to be led, which is where the campers took over.

For a calf, being pulled along with a rope is not a natural behavior, but being pushed is. Cows will use a horn like a scoop to push a calf or another cow forward. So, I paired the campers in teams of two; one to lead and the other to push. The pushing helped the calf get the idea of moving forward, which it then associated with the gentle pull of the lead rope. Of course, if a calf decided to relieve himself while a camper was pushing, the "pusher" got a special surprise. But not to worry, we had plenty of hoses and soap for those rare moments.

Sometimes when a calf moved too fast or decided to run back to Mom, both campers would hold the rope to stop the calf from escaping. It's all about teamwork – and sometimes falling on the ground.

Bruises, skinned knees, and dirt didn't bother the campers, except when the dirt was on their calf. Almost every morning, heifer Sophie needed washing to keep her snowy white coat shiny and bright. The darker calves only required a quick hose-off or vigorous brushing to clean up.

Afternoons were set aside for games and calf snuggling. After a morning of training, most calves lay down for a snooze, the perfect time for the campers to cuddle up with their assigned calf. It was an ideal end to a day of training and brought joy to my heart as I watched these teams chill out together.

After a few days of uncertainty, the two calves, born on July 23, are thriving. As some readers might remember, Heidi's teats were too large for her calf's little mouth to grasp, and for three days, I bottle-fed and administered antibiotics to the calf I named Curley. But a few days later, I dumped the milk I had prepared because he was vigorously nursing.

The Trouble With Twins

Kavi's surviving twin, Chip, was born on the same day as Curley and needed more care. Twins are not always a blessing. One reason is that they have to share space in a womb built for one. So they are smaller. Also, when one twin is a male, and the other is a female, the bull's testosterone will make the heifer calf sterile.

Even though he nursed shortly after birth, Chip seemed weak and, like his mother, had a temperature of 104 (normal is 101-102). I gave them antibiotics and separated them from the herd so Chip wouldn't get stepped on when he was sleeping, which was most of the time.

On Monday morning, more than a week after his birth, I was excited to see Chip lively and bouncing around. He and his mother now share their stall with two heifer calves, Feather and Harriet, who are learning about humans and halters. Kavi won't let them nurse and barely tolerates them, but Chip seems to like their company.

Farm Camp is over, but there is more adventure ahead. We are expecting five more calves, but hopefully, no more drama. For now, I'm going to take a lesson from the campers and take a siesta with a fluffy calf for a pillow – a sure cure for the day's cares. 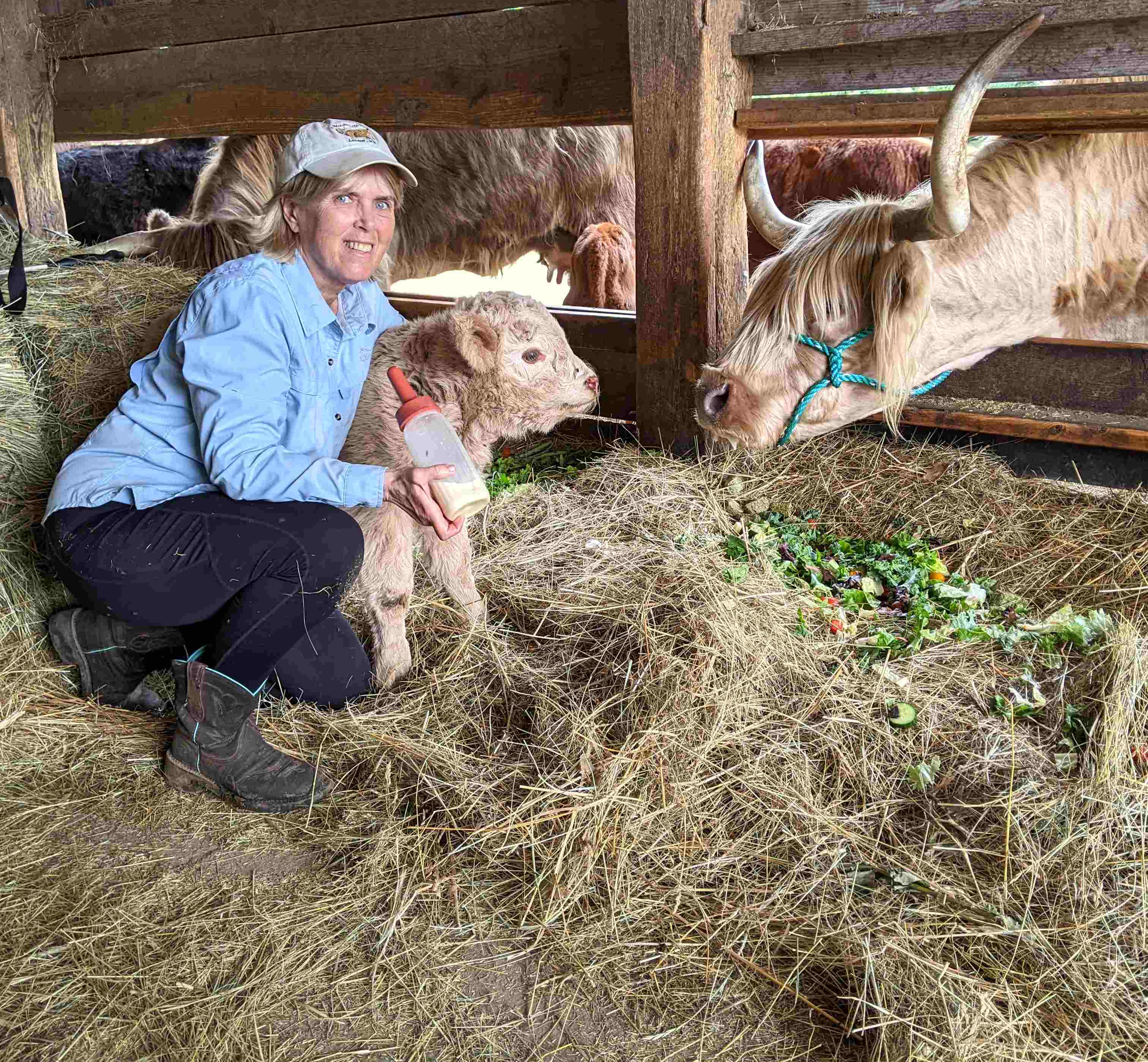 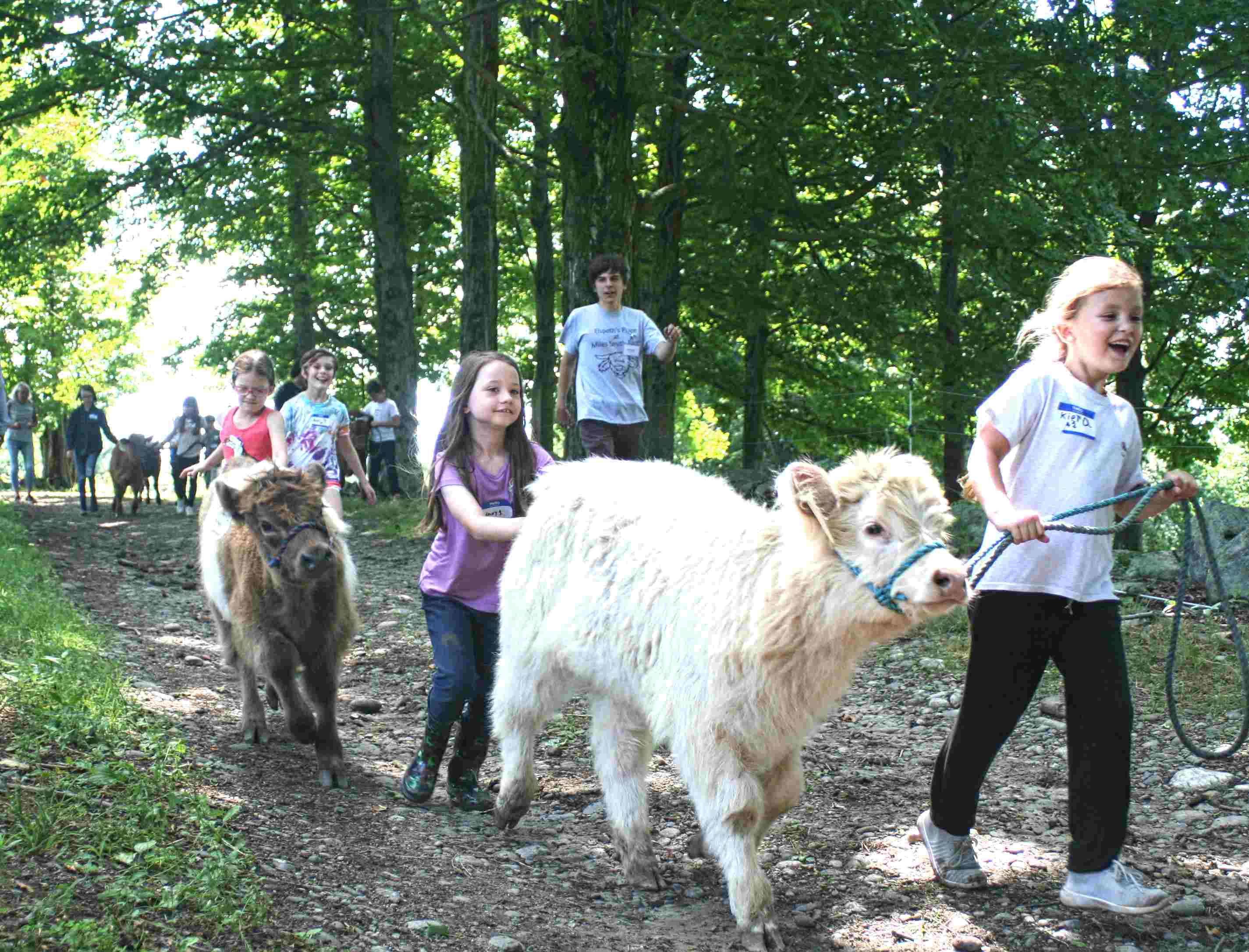 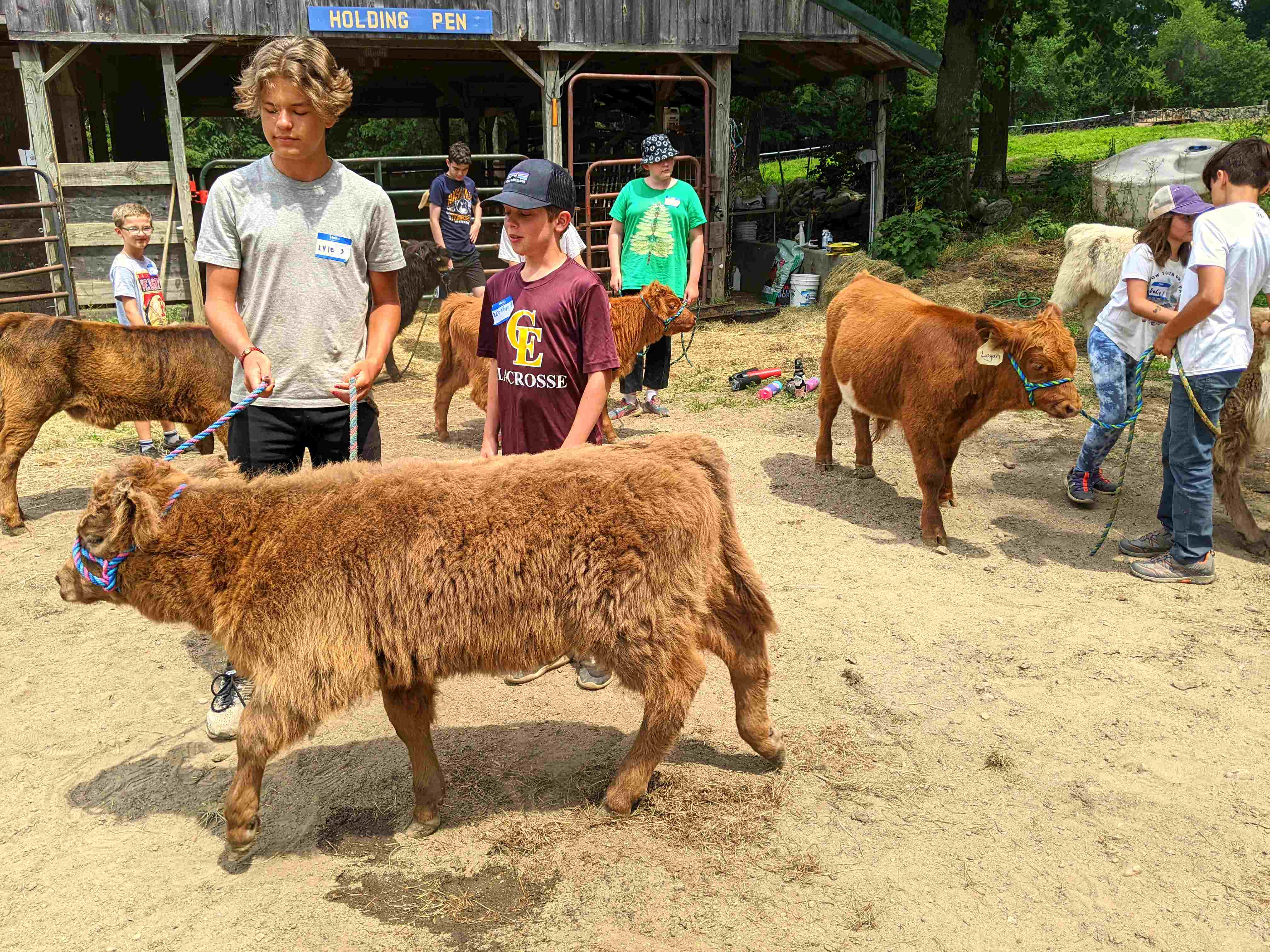